"Talk about a cat with attitude"

"Had me laughing out loud and crying happy tears" 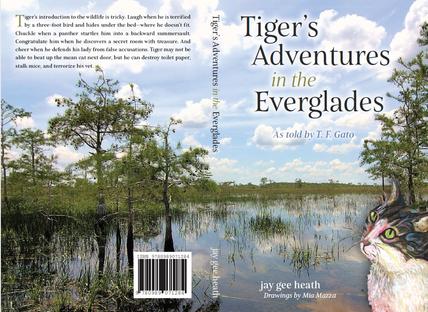 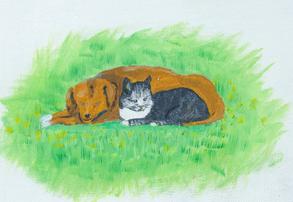 Tiger's Adventures Volume Three will be out in July 2019​​​

Watch him play with his brave new friend, Killer. Snicker at him stuck in a coconut. Laugh when he stumbles into a patch of beggar lice. Shudder when he is stung by a scorpion and cringe when he is attacked by a large dog. Plus two more.

Tiger's  Adventures in the Everglades

Five short stories. Tiger, a saucy and irreverent cat, moves from the big city to Everglades National Park with his mistress.

Tiger’s Adventures in the Everglades is five short stories with sketches. The stories are written from Tiger’s point of view, about his encounters with the wildlife, sometimes with funny consequences. This is the first of a series of Tiger books.

In the first tale, he moves into an old, hopefully, rat infested trailer with his lady, Boston. When he sees his first heron, he hides under the bed, and gets stuck. He backs carefully away from the rattlesnake and the Florida panther disrespects him before walking off. He is safe inside when the very rare crocodile walks by scattering lubber grasshoppers.

In The Hidden Room, Tiger sulks when Boston leaves him alone for the night. He eats his food, plays with his toys, and naps. Later he stumbles through a hidden trap door. There is no way out and nothing to eat and he falls asleep hoping he doesn’t starve. Boston rescues him and discovers the secret room is a bootlegger’s office with stolen goods from a theft many years earlier.

He TP-s the bathroom in The Lost Laptop, covering the floor with torn scraps of toilet paper and cat litter. Pleased that Boston is not angry, actually a little impressed. Proud of his work he listens to her tales of her day as she cleans up. The camper who cut branches and burned them. The woman who threw cigarette butts at the alligator.  Both are surprised when she is accused of inappropriate actions. Tiger spits a fur ball into the accuser’s shoe.

Tiger is outraged when a hawk steals his snack out from under his nose in The Hawk and the Rock. He doesn’t get any sympathy from Boston because he’s not supposed to injure anything in a park. Boston. The FBI have tracked down the history of the bootlegger and recovered all the items he stole and Boston and Tiger will receive commendations.

Boston’s seasonal position is ended and she takes Tiger to the vet for certification papers so he can fly home. While there, Tiger terrifies the vet. On the ride home, they see alligators and key deer. Neither want to leave the park. Or the people. In Family, Tiger gets to stay in the Park.