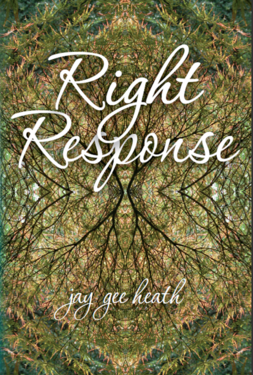 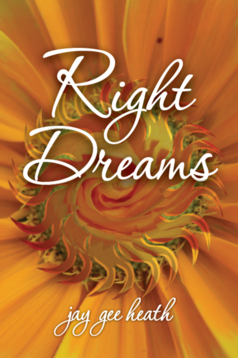 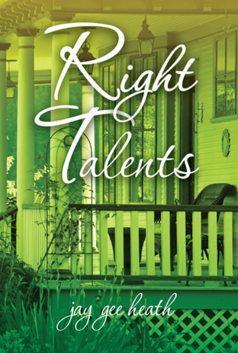 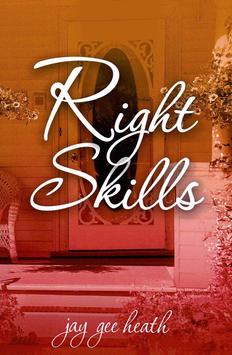 ​​​Right Talentsis a romantic suspense.  May was drafted to manage the shop owners’ seasonal advertising campaign because she had sort of mentioned some promotional ideas. But how did she become mixed up with an FBI art theft investigation, a bad-tempered, undercover, charter boat captain, and a drug supply trafficking ring? Oh, right, she had found that stolen painting and then the FBI had insisted she work with Nick, who didn’t seem to be able to say anything nice to her. She didn’t want to be near him because she really didn’t understand the attraction she felt. She was still a married woman, pregnant married woman, for goodness sake. And she wasn’t about to get involved with another man, was she?

She had come to Cougars Cove, the right place it turned out, to make a future for herself and her unborn child. The child whom her controlling husband refused to acknowledge as his. The husband who had kicked her out and immediately begun divorce proceedings. With the right talents she landed the position of sales clerk in a vintage clothing shop, which led to a dream contract to redesign damaged vintage apparel into fashionable outfits.

She doesn’t know she has the clue Nick needs to close his case, but she rescues her friend from the drug dealers and later uses all her talents to save herself when cornered by the art thief.

Find Talents on Amazon and Kindle.

Right Skills is a contemporary romantic suspense about Cilla, Jake, a group of computer geeks, revenge, cyber espionage, and money laundering.
He had abandoned her ten months ago. Left without a word. With another woman. Cilla had loved Jake. Still loved him. Was still married to him. How silly, stupid was that? Now Jake was back and accusing her business partner, Peter, of being both her lover and a spy. And he expected her to help him trap Peter. She knew Peter was innocent but to prove it she would have to work with Jake.

Cilla enlisted her four friends; the other members of her gang of five all computer geeks. The five friends had come a long way from abused childhoods and each was now successful in his own field. They were developing a computer game to raise funds for a safe haven for abused and neglected children. The gang quickly proved that Peter was innocent and tracked down the real culprit who was planning to auction the secrets online. They develop a trap for him and the buyers.

Jake believed he was protecting Cilla by leaving and he brings danger back with him. Sheri Webb, the leader of a white slavery ring he had busted, is after Cilla and her friends. While tracking Sheri down, the gang uncovers a money laundering operation and soon the local police, FBI, and Homeland Security are involved.

Find Skills on Amazon and Kindle .

Right Dreams  After Detective Becca Travis is shot during a routine patrol, she is determined to find the gunman. Although her captain’s investigation found that the shooting was random, Becca simply can’t shake the feeling that there was something very personal about the crime.

While recuperating at home, Becca zeroes in on a list of potential suspects. First, her ex-boyfriend whom she had recently broken up with must be considered. Second, all of the crooks involved in the three cold cases she was investigating the morning she was shot. Enlisting the help of Ryan Gibbs, a family friend and FBI agent, and her brother-in-law’s security business, Becca sets out to discover the truth.

What she finds changes everything. Becca discovers a shocking web of crimes as she follows one case after the other. A murder/suicide investigation that was prematurely closed by the FBI despite the locals’ vehement objections. Two armed robberies that occurred a number of years apart but which show signs they’re somehow connected. And an undercover operation focused on a high-class call girl ring.

As the pieces slowly fall into place, Becca’s search for her shooter will ultimately lead her to devastating truths about her own horrific childhood and maybe even a chance for love.

Find it on Amazon and Kindle.

​Right Response All FBI Agent Ryan Gibbs wanted to do was convince Becca to set a date. He’d had to get shot before she’d agree to marry him. Now, she was stalling. Her family, she said. Her family – an amalgamation of good people not a single one a blood relative. He took a week off to work on her but then her brother showed up with a girl he’d rescued from a killer. Jif had heard the killer admit to four killings, witnessed him murder a co-worker. Now the killer had followed them home.

What first appears to be a simple case of multiple murders soon includes drug running and money laundering, a charity funding student research with the sleazy manager stealing their inventions, and a crooked cop, all interconnected. The situation turns deadly when Gibbs sets a trap for the killer using the girl as bait. When the autopsy on one of the murder victims finds he’d been exposed to radiation, the situation escalates to possible terrorism.